This week we are going to learn how to trade and crush the false break. You know sometimes you enter a trade, feeling so confident that you are going to make a killing,only for the market to do a major 360  reversal against you. If you haven’t experienced this scenario,consider yourself  a very blessed trader. A lot of traders, mostly inexperienced ones, have fallen victim to this mouse trap.

You see,this is what the false break  strategy is what it’s all about. It’s the consequence of a herd mentality where naïve traders buy at the top of a trend or sell at the bottom of the trend. Consequently, the mouse trap springs,and  a lot of rookies get slaughtered in the process.Consequently, these rookies lose all all their money in the process. As a sharp price action trader you’d be crazy not to take advantage of this ‘green behind the ears’attitude by these amateurs.

I guess the first question is:

What really  Is a False Break ?

A false break can be described as a false alarm. The price breaks the support/resistance level after testing the barrier. The amateur bulls immediately  see this as a huge opportunity to cash in. Unfortunately,the market is unable to sustain this momentum at both the support or resistance levels. So instead of closing outside of the level being tested, the market reverses in the opposite direction, causing a false break in the process. It basically leaves a lot of carnage in its wake.A false break is a huge sign  of  an imminent market reversal,and as a price action trader, you need to use it to your advantage instead of falling into the mouse trap. Let’s see a typical example of a false break

Here,the blue circle represents the false break taking place. The price penetrates the support level,giving the impression that the bears have taken over.All of a  sudden,the market does a 360 doing a complete reversal, and heads for the mountains,  leaving naïve traders holding the bag. You as a trader ought to keep your eyes wide open for profit opportunities in such carnage. I’ll  show you how to capitalize on such opportunities later.

Now that we’ve ascertained what a false break looks like, let’s take a look at:

A bull or bear trap is typified by a 1 to 4 bear pattern,which is defined by the false break of a key market level-In this case a support or resistance level. These false breaks are triggered after huge trend moves and as a market approaches a  a key market level. Most rookie traders make the mistake of thinking that just because the market makes an aggressive move, it gives them the green light to buy or sell at the break out. News flash! If  you buy or sell without reading the signals correctly,you risk getting faked out by the market. And when the market fakes you out, it sets a bull or bear trap for  you.

When Does A  Bull Trap Form?

A bull  trap forms after an uptrend comes into being. Here, naive traders get sucked into entering trades,thinking that the market has gotten momentum. Unfortunately the big bears  burst out of the woodwork to drag the price lower, leaving the rookies trapped in a costly losing position. It’s kinda like a lion stalking an elephant in the jungle. The deer roams free and the lion pounces on its  prey. Let’s take a look at a bull trap.

This is a classic illustration of a bear trap in action. Naïve traders have been sucked into entering trades at the resistance level. Unfortunately the bears pull a fast one on these naïve traders by dragging the price down, leaving the naive traders  literally holding the bag.  For more information on the bull trap run to Trading The Bull Trap

And When Does A Bear Trap Form?

A bear trap is the complete opposite of the bull trap. The bear trap forms  after a downtrend is formed. The same sucked in principle is at play here. Overzealous traders fall into the temptation of entering a trade because of a misguided notion of the downtrend gaining momentum from a strong move.The downtrend runs out of steam and the bulls drag the price higher,leaving these poor traders laughing at the wrong side of their mouths. And once again,the lion  crushes the deer to pieces.Let’s see a bear trap in action.

This, my friends is the bear trap in action. Over-excited traders buy into short-lived downtrend momentum.The bulls pull a fast one on them and head for the hills with an upward surge in price.This leaves these overzealous traders in a bad place.  If you want to get to really know the bear trap, read up on  Let’s Trade The Bear Trap.

Next in line is:

False break of consolidation is probably the most common false break. In case, you’ve forgotten, consolidation is a period where  the bulls and the bears take a pause from jockeying for position on the market. It also reflects bears and bulls unwavering in their positions on the market, which causes the price to move horizontally in a narrow range.

Now back to false break of consolidation. Sometimes,  traders are tricked into thinking a trading range is going to breakout of the support level, only for it to do a reverse  back into the body. Let me give you piece of advise. Just wait until there is an absolute close outside of the trading range,then you can starting hunting for price trading signals along the breakout. Let’s take a look at a false break in consolidation. 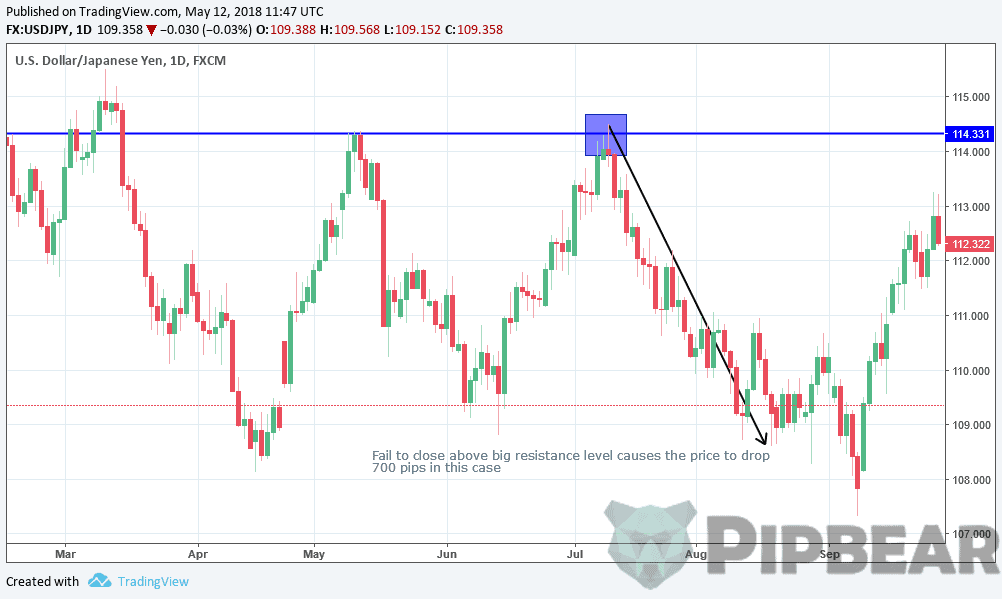 This is a false break of consolidation in action here.Traders fall for a possible breakout  of a trading range,only for the breakout to reverse back into the body of the range.Failure to wait for a confirmation of close in price will cost you dearly in your trading account

Let’s see  an example of a fakey in action

This, ladies and gentlemen is the fakey in action.In this instance it’s a bearish setup with inside bars forming just  in front of the mother bars. The fakey pattern has great profit opportunities. You just need to keep your eyes open for those opportunities.

And finally, to what we’ve all been waiting for.

How To Trade False Break Strategy.

Pay attention the candles tails that appear near the support/resistance levels. Find out where the tails closed during the daily session. Why? because the close is the most important level of the day. And if the market fails beyond  a key level, this could signify a false break. You need to keep your eagle eyes open for that possibility. Often  times the price attempts to break out of a support or resistance level. by the close of day, the price rejects the lever, triggering a large retracement or change of trend. So watch out for the close as part of your trading strategy. Let’s take a close at false break on the EUR.NZD daily chart.

This is an illustration of the type of false break that I was referring to above. The market started  with a strong uptrend but then suffered a strong rejection at the resistance level, triggering a massive downward spiral.

That’s a wrap   for “How To Trade and Crush The False Break. ” It’s possible to profit from false breaks while others are caught on the wrong side of these false breaks. You just need to keep your eyes open and not get caught up in the over-excitement. Next time we’ll start a two topic series on  trading bull and bear traps and false break on consolidation. I’ve already touched on The Fakey pattern. But because I’m a very nice guy, I’ll  give you the link to my fakey pattern post:How to Trade the Fakey Pattern.

1,181 thoughts on “How To Trade and Crush The False Break”