Hello and Welcome to another edition of the bulls vs the bears. Today I have an important nugget of trading wisdom for you. And it is “Allow The Forex Market Hit Your Targets.” Now I can hear somebody saying”What do you mean by that?” Well all I am saying is allow the market to hit your stop loss or your profit target without you compulsively closing the trade yourself.  Don’t exit your trades too soon before price hits your stop loss or take profit targets.

When you do that you hurt your chances of making huge profits. You are basically settling for breadcrumbs. And you end up racking up huge losses by taking up small losses So to get started I’m going to show you a little illustration. Then I’ll show you some examples of allowing the market to hit your targets as opposed to compulsive closing your trades. I will also show you an illustration when it actually makes sense to head for the exits.

I guess the question of the day is:

Why Should I Not Compulsively Close My Trade?

Because if you compulsively  close a trade that is turning against you, you end up taking a loss.You see forex trading is about making profits to offset your losing trades. Sure you are going to have losing trades.But you have don’t have to close them by force all the time. All these small losses eventually add up, and they may end up wiping out your  trading account. Now we don’t want that.Do we?

Now let’s look at a little example: Say you enter a trade on your demo account, and it goes sideways for a week. The following week it heads downwards, almost stopping you out for a loss. At this point you are staring at a huge loss. The following week, the trade makes a dramatic U-turn to shoot upwards like a space shuttle and hits your profit target. You ‘re so excited you end up screaming “BULLS EYE!” You’re probably saying to yourself”Well,what has that got to do with anything?” Well  A LOT.

You see with a demo account you are thinking logically by allowing the trade to sort itself out. You feel no reason to interfere with the trade. The last thing you want to  do is to compulsively exit a trade  that could turn out to be a humongous winner. Fortunately you allowed a losing trade to transform into a winning trade because you chose to do nothing. What’s the moral of the story? Let the trade find its level.

You need to give the trade oxygen to breathe. You’re probably saying”But I want to make money NOW!” sorry, but  you can’t control the market by remote control. Just hang tight for a few weeks while the trade tries to find its level. The question is can you stay calm this way on a live account? That’s something you will have to figure out if you want to prosper as a forex trader.

With that out of the way let’s take a look at examples of the forex market hitting your targets versus you compulsively closing your trades. 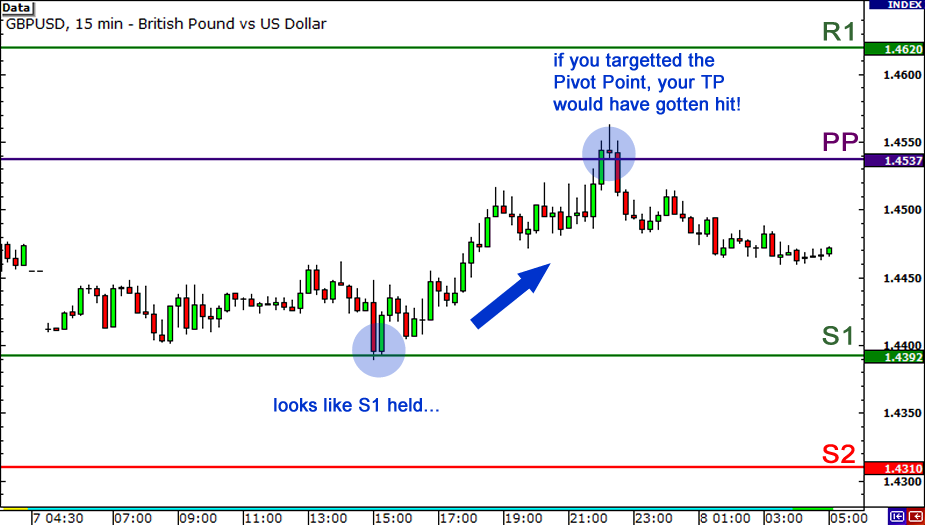 Ladies and gentlemen here is a classic example of how to stay in the trade using the GBP/USD pair.  If you didn’t know already  this is range trading with pivot  points. The bluish circle indicates  S1(Support level) surviving a  major hit by price. By that you’d have put your stop loss just below S1.  That’s because S1 managed to hold back price.

Now a little further up you set your profit at 1.4537. And guess what, your profit target takes a positive hit. See what a little patience does for your soul?  you waited for the market to take you out of  your trade, and you ran all the way to the bank laughing and smiling. Had you bailed out of the trade  you would have left a lot of money on the table and ended up with breadcrumbs instead. Here is a price setup  of a counter trend pin bar signal.

Take a close look at the bearish pin bar at  the 48 pip target. Now just because a pin bar goes bearish doesn’t mean you should jump ship immediately. As you can see, the bear immediately changed to a bull, sparking a huge surge. Just because a countertrend appears does not mean you immediately jump ship. Just use key levels as indicators of whether to decide whether to make your exit. So what’s the moral of the story? Don’t play Russian Roulette with your trades and avoid compulsive exits.

Instead let the forex market hit your targets. If you need help with how to take profits and stop losses look up  A Few Rules on Taking Profits and How to Place Stop Losses the Right Way. I can hear somebody asking…..

Are there Exceptions to This Rule?

Sure there are exceptions to this rule. In fact there comes a time in a man/woman’s life when you do have to exit your trade for dear life hen the tide turns against you. However the following conditions have to exist for you to run for dear life 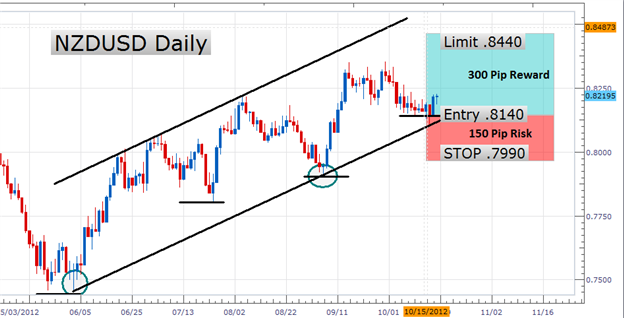 Ladies and gentlemen  I present you a high probability  trade setup using an upward channel using  the NZD/USD pair. As you can see Take Profit has been set at 300 pips at .8140 mark. whereas a stop loss has ben set at 150 pips at ,7990 mark. The key here is setting these values prior to making these entries on the market. In deciding where you are going to place your trades, you have no doubt in your mind what to do once price hits these targets. RUN FOR DEAR LIFE

This concept is fairly straight forward.Why?Because you decide on these values prior to entering the trade. Once  you decide where you in advance where you are going to place these values ,you should be in no doubt as to what to do when  price massages  your targets.

That’s a wrap for ”Allow The Forex Market to Hit Your Targets.” As you can see, it’s possible to prosper as a forex trader by doing ABSOLUTELY NOTHING! By that I mean cutting down on playing Russian Roulette with your trades and compulsively exiting from potentially profitable trades.When you cut down on these two negative habits, you give your account a massive chance to grow.

That’s not to say you’ll never experience losses. Because the losses will come. All I’m saying is STOP TAKING THOSE COMPULSIVE LOSSES FOR NO REASON!They will slowly kill your trading account softly. And before you know it, you will have nothing left to trade with.

There are three key components you need to have in your trading makeup.They are: accurate stop loss placement, accurate reading of price data on the charts and keeping a check on those    raw emotions. Those raw emotions,in particular, could cause you crash horribly,if you don’t put a leash on them. Some of you may be asking” How do I avoid compulsive losing?” First cut down on your risk per trade so that your emotions are not torn to shreds  when the price takes a swipe at your  stop  loss position. If it means learning stop loss placement,  and how to trade with price action by all means do that. But whatever,you do, stop taking compulsive losses just because you’re scared price is moving against your position or the market skewed sideways.