Hello and welcome to another episode of the bulls vs the bears. Today we are going to look at the phenomenon of risk /reward in Forex Trading.  And I’m going to start today with a simple message:Put in your risk you get your reward.  Let’s get one thing straight.  Trade setups is all about possibilities. If you can visualize these possibilities  in terms of risk/reward you  should have no problem achieving consistency in your trades.

Now how do we achieve consistency in  trading? Develop a sharp instinct for identifying clear and unadulterated trade setups. Of course  You need to be at the right place and at the right time to spot these setups.  It’s like  the watching the eclipse over and over again.  Risk to reward trade setups give you a significant opportunity to make consistent profits.  So if you are able to master the risk/reward process, you’re on your way to the promised land. So how do we master risk/reward? First:

You need to draw risk/reward levels or ratios. before deciding on how much you want to risk.   Basically all you are doing here is calculating how much money you are willing to risk to give the trading setup the opportunity to convert from probability to actuality. Please do not think of reward first before risk. OR you put a stop so tight that it could choke the life out of your trade. Do any of these , and you will burn a huge hole in your trading account.

Now why do I say calculate risk first before reward? Because you want to create a heightened sense of awareness of the risk involved in each trade setup. In so doing you don’t obsess  too much how huge a profit you are going to make with the setup. In so doing you are able to manage risk more effectively than merely entering a trade like a gambler. The best traders in the business are the best because they are great risk managers.

Now once you have identified the trade setup and labelled the risk level, you then label the reward levels as multiples of your risk. Now there are three levels you need to draw: 1* the risk, 2*the risk, and 3* the risk. Now let’s take a look at a few illustrations of drawing risk/reward levels 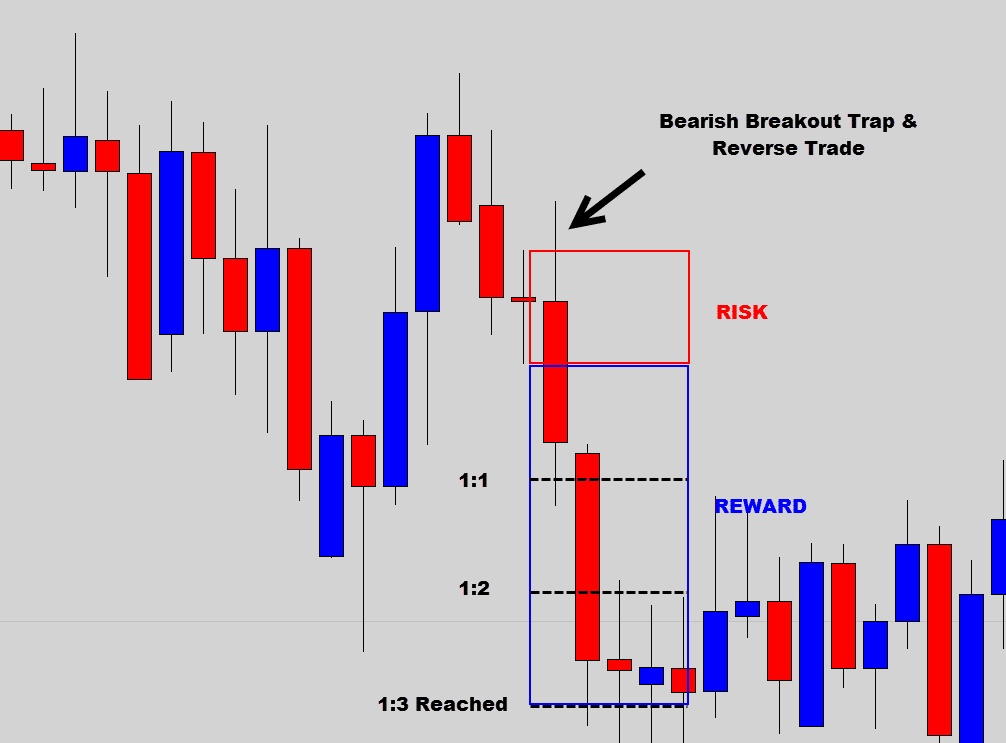 Right in front of you is a perfect illustration of risk levels drawn on a bearish breakout trap and reverse trade. As you can see the risk/reward levels are nicely  labeled from 1:1 through 1:3. The risk(labelled RISK) was entered as the bears broke out on the slope. However, the reward was achieved at the bullish reversal trend as price hit the 1:3 ratio.

Let’s look at another illustration using the support/resistance route

Use of Trailing Stops

Now should you want a a trade setup run forever, you will want to employ the use of the trailing stop. Now in case you’ve forgotten, the trailing stop is a market order that is placed below the market price. Somebody is probably asking”How Do we do this?” First set your risk ratio levels. But this time let the trade run without  a set exit target. Once the market moves in your direction, you use your pre-set reward levels to trail your stop loss. In so doing you stand a chance of locking in some serious profits and lessening your risk at the same time. The best way to use the trailing stop on risk/reward levels is when the trade is one or two times your risk.

You can also bring your trailing stop 50% closer to the entry level trade once the trade has hit the the 1R level. Reason being that you want to give the trade some air or room to breathe.  So that if you are up 1 to2, you trail your stop up to lock on 1 times your risk. If the market moves at 1:3 you  you trail your stop to lock in 2 times your risk. This technique is quite reliable. Why? because you are locking inn on your profits while at the same time leaving open the possibility of the trade turning in your direction. Now let’s a look at an illustration of the trail stop  on a pin bar setup.

This is a nice illustration of using a trailing stop to lock in your profits. The “R” represents the risk Entry level is at the engulfed level. You put your stop loss at the tip of the candlestick. Now as you can see the uptrend is running away and racking up profits at every turn. Why,?it’s because you have no set exit plan, paving the way for you to lock up more profits. For more information on trail stops look look up Forex Basics -Top To Bottom Part II.  I suggest you read up on Forex Basics Top To Bottom – Part I  so as to get the full trading pictujre

So How Do Achieve Consistency  In Risk Reward?

Very Simple! DON’T MEDDLE WITH YOUR TRADES! Stay out of them. You don’t want to enter a trade at a risk/reward ratio of 1:2. Later you enter a low probability trade and incur a loss. When you do this you limit the power of risk/reward, not to mention your own potential to achieve as a forex trader.

That’s a wrap for “The Phenomenon of Risk/Reward in Forex Trading.” It takes discipline combined with knowledge to master Risk/Reward concept. Plus, you can’t second guess yourself either.  With these two concepts you could be the Usain Bolt of forex trading.  Just allow the trades to play out and you’ll be laughing all the way to the bank with your profits- even if you lose more trades than you win. It’s a win win situation. Til next time  take care.