Hello and welcome to another edition of  the bulls vs the bears. A while back I did a post on  How To Cash In On Trading Breakouts. .  This week we are going to learn how to trade breakouts with ease and we we will be   looking at three breakout patterns

Knowing the type  of breakout you are dealing with is absolutely crucial if you want to succeed as a forex trader. Why am I saying so? Because it will help you understand the bigger picture as to to the happenings on the forex market. Breakouts are also crucial in the forex market’s scheme of things in that they help indicate the change in preference as to the currency pair you are trading. In other words they indicate the change in supply and demand. This pendulum swing those huge moves we so dearly love. And they create huge opportunities for racking up profits.

So the first breakout pattern we are going to touch on  is:

Continuation breakouts  are trade setups that shows price action skewing sideways. Here  buyers and sellers take a breather to contemplate their next cause of action after initiating huge moves on the market  Here, prices drop with the bears selling short to take their profits. Once they recover their bearings, they resume selling again. Consequently, it causes a period of consolidation which result in the skewing patterns you see on the charts. Let’s take a look at an illustration  of consolidation before the breakout  using the USD/JPY pair. 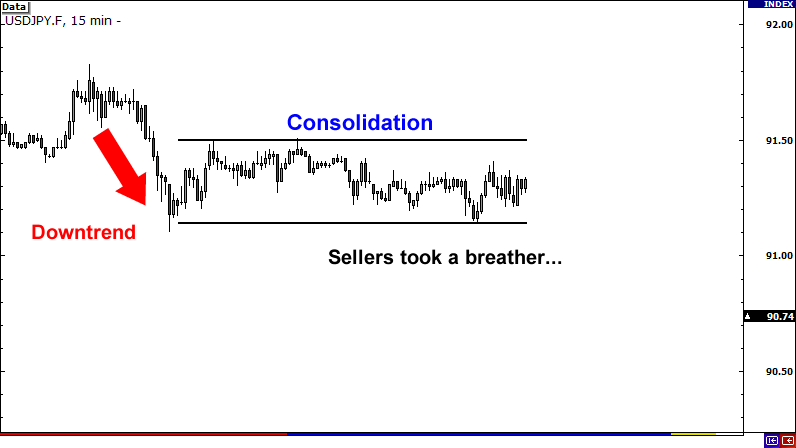 Ladies and gentlemen, here is an illustration of  consolidation. You have  sellers taking a break after closing  out their original trading positions.  You see  the sideways  formation that I  explained above? Now let’s see what happens when the bears decide to push price in the same direction 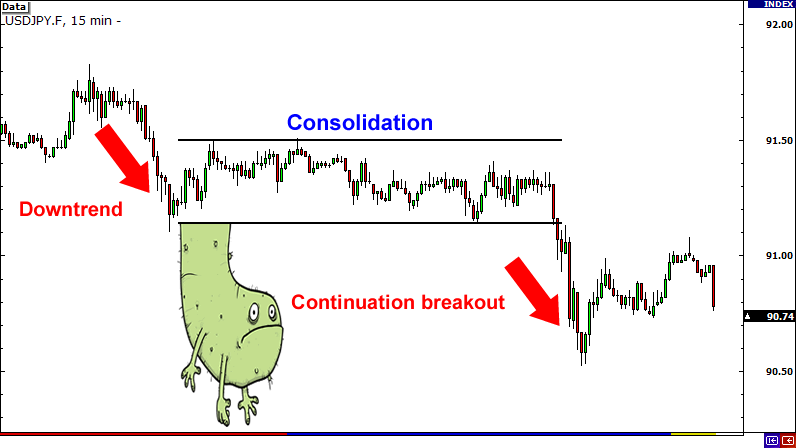 This ladies, and gentlemen is the continuation breakout that I explained earlier, Basically the bears have decided to continue with the initial trend that they initiated earlier. In so doing they are going to continue selling til they drop.

Reversal breakouts occur where traders  run out of steam at the end of the trend. So they decide to do an about turn by pushing the price in the opposite direction. And just like its continuation counterpart, the traders take a long pause . Now let’s take a look at the reversal breakout in action 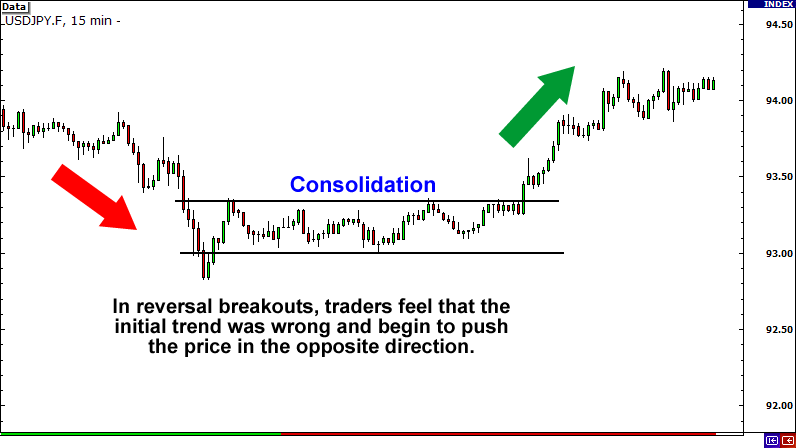 Here we see a consolidation period as a result of the traders taking a breather.However,realizing that the initial downtrend was running out of gas,  traders do an about turn and decide to breakout and head for the hills (as indicated by the green arrow). You can only imagine the profits they cold accumulate on their way up.

Now false breaks are very dangerous customers. False breaks take shape when price breaks through a certain level(e.g. support or resistance) but discontinues its advance in that same direction.  And when that happens you may find your initial trading position swallowed by a  blood sucking consolidation. Let’s a see a false breakout in action 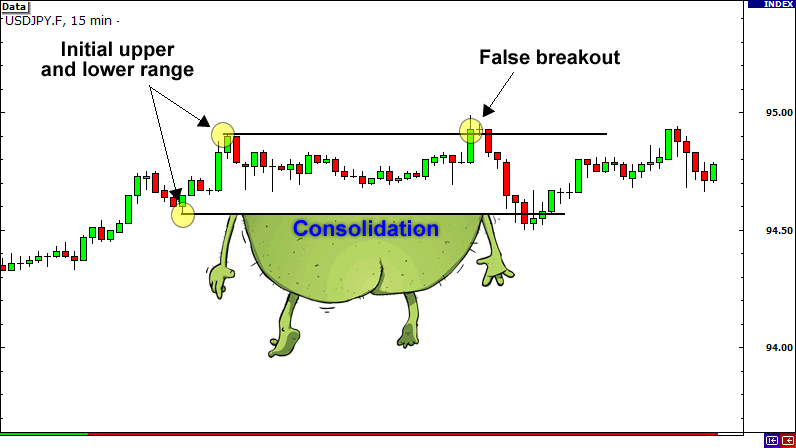 The yellow circles in the upper and lower consolidation areas  represent the false breaks I referred to earlier.Instead of continuing in the same upward direction price does a complete pump fake and heads downward. What resembles a price increase is immediately followed by a  price crash straight  into a consolidation zone. Now someone is probably asking

How Do I Enter A Breakout?

Wait for price to retrace  back to its  original breakout level and see whether it creates a new high or low. Of course it depends  on the direction you are trading in.

Also do not pounce on the first breakout that catches your eye. In so doing  you deny  yourself an awesome chance of racking up huge profits.The downside to keeping watch is that you may miss out on profitable forex  trades as price accelerates at the speed of light. Trust me, I’m talking from experience.

That’s a wrap for “How To Trade Breakouts with Ease. ” It’s possible to profit from trade breakouts if you know which breakout you are trading. Think of breakouts as indicators of the grand scheme of things on the forex market. That they also help reveal the change in currency preference in terms of the currency being trades.