I guess the obvious question is:

What is a Bear Trap?

A bear trap is basically a contraption set up in the bullish trend for naive sellers.Just like their  brethren, caught in the bull trap, they fall for the possibility of making a huge profit. except this time, they get baited into believing tha And just like their naive bulls brethren,they’re left holding the bag. To make matters, they’re in a lot of pain. Why? Because all their initial profits are about to go out in smoke and their precious stop loss is about to take a massive hit. Basically these naive bears are about to incur a huge loss. They basically started counting your eggs before they were hatched.

Let’s see a classic example of a bear trap

This is a bear trap in action. The red bears  downward slide create the impression of an imminent sale only for the green bulls  to set a bear trap, at the support, level jack up the price and head for the hills. Unfortunately the naive bears they face the double-edged sword losing a lot of money and their stop loss order taking a massive hit.

Twos Features To Look Out For  In A Bear Trap

There are two features  you absolutely need to look out for in a bear trap. The first candlestick must be absolutely bearish. It must be seen to be breaking through the support level and closing after the support level . Even more important,  the next two bears in between the bear trap must be seen to be losing steam. When this takes place,  shorter candlestick body lengths take place. This represents the formation of a bullish reversal.

If you are still not sure about support/resistance levles please hurry to my Identify Support and Resistance Levels With Price Action Analysis  post.

Where Do Bear Traps Occur?

Now that we know about the monster called the bear trap,What are we going to do about it? Hear are a few tips on how to dodge the bear trap

If you’re a bit dodgy  on your candlestick patterns,  go to my post on You Need To Know Ten Of These Candlestick Patterns

If you want to beat the bear trap,follow the dominant trend-in this case the downtrend. If the breakout at the support level is not in the direction of the downtrend,it can only mean one thing -BEAR TRAP! And you know very well that the smart bulls will be only too glad to push the price up and head for the hills, and leave the naive bears licking their wounds. In case you’ve forgotten what a downtrend looks like,take a look 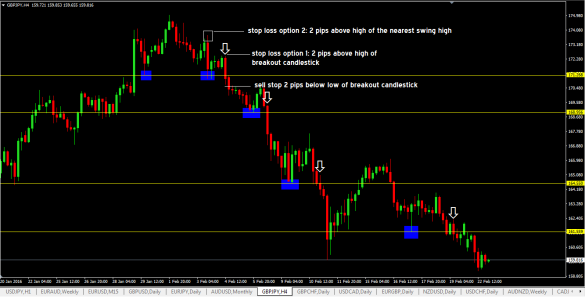 As you can see the breakout is in the direction of the downtrend.It has not taken any detours as you saw with the bear trap. If this scenario doesnt unfold on your screen, don’t bother entering a trade. If you do,you’d live to regret it.

If you’re still not sure of your trend trading, refer to my Trade Trends With Price Action  Analysis Post

Trade Retracement Instead of Breakout

Sometimes it makes sense to trade the retracement instead of the breakout at the support level. Some of you  are probably wondering “What is a retracement?”Well, a retracement is a temporary reversal of a currency pair against a dominant trend.  So instead of taking the risk of being bear trapped,  how about allowing the breakout to happen?And then once the price moves down,with downtrend still intact, wait for price to drop a bit and then you make your sale. Let’s see an example of retracement in action.

As you can see from the GBP/USD  graphic, the downtrend is heading towards the support level, which is indicated by the green line.  Don’t trade the initial breakout, but watch the price drop and then trade the retracement.

Keep Your Eyes Closely On Two Candlesticks After Breakout.

Keep your eyes closely on two particular candlesticks after  the initial downtrend break. Why?Because two things hit these two candlesticks -Loss of momentum and bullish reversal. If these two conditions exist, scream BEAR TRAP! You may also want to start heading for the hills with your profits or put  a stop loss to save potential blushes. Let’s take a look at the first graphic again.

As you can see from the graphic, the bear trap has triggered a major bullish reversal after the initial breakout.The naive bears were made to believe they were going to cash in massively, only for the smart bulls to drive the price up and head for the hills. These bears will be seriously hurting.

How To Trade Bear Trap

If you want to put your neck on the line to trade the dreaded bear trap, here are a few ground rules you need to keep in mind.

This EUR/JPY graphic illustrates  the bear trap  trade. Notice the stop loss  1  below the bullish and the stop loss numbered below the candlestick with the thin end.  Of course you see where to take your profit. Don’t get too greedy.

That’s as wrap for “Let’s Trade The Bear Trap.” Just like the bull trap, the bear trap creates the impression of a major trend only to create a huge reversal, leaving  naive bears holding the bag.  Hopefully none of you will suffer the same fate  when you come face with the bear trap this week.